Born of a love for traditional computer role-playing, Broken Roads provides a rich, engaging narrative in which players make their way across a desolated future Australia. Blending together traditional and all-new role-playing elements on top of a classless system offering nearly unlimited character development options, Broken Roads presents players with an original morality system: the Moral Compass. This novel design sees dialogue options and questing decisions influence, and be influenced by, a character’s philosophical leaning.
At the heart of Broken Roads’ thoughtful and mature storylines is a deep and meaningful morality system – the Moral Compass – that influences quests, dialogue, and character development. The system is shaped along four different philosophical paths: Humanist, Utilitarian, Machiavellian, and Nihilist, each with their own unique traits. As the journey begins, players will be asked a series of questions – moral quandaries – that determine their starting position on the compass. Decisions made throughout the game will then shift their philosophical leaning and affect future choices, quests, and reactions from the people they meet. 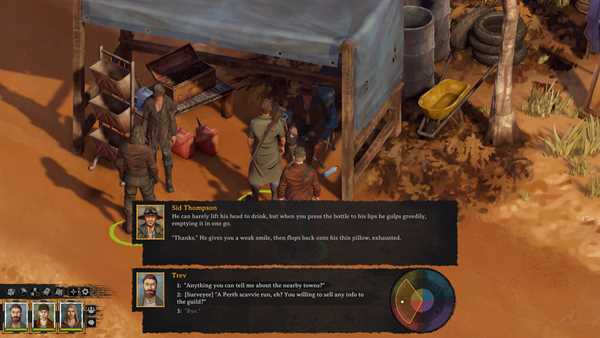